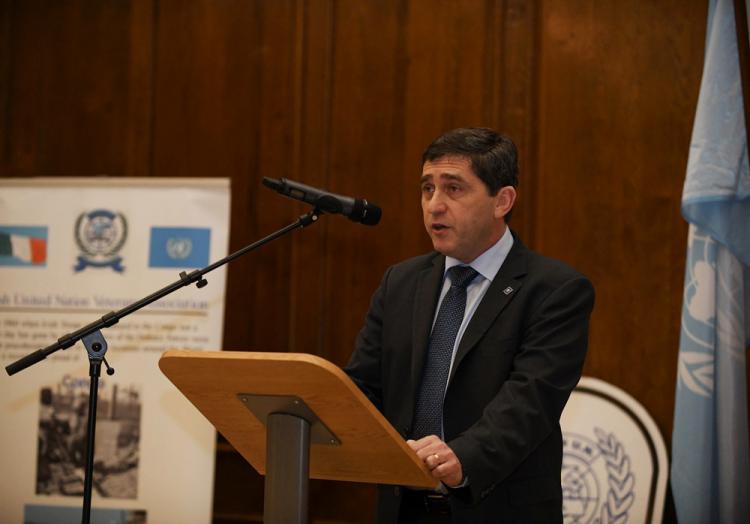 Head of ESDC presenting at the GAP Conference

Some key topics covered during the conference were the following:

The European Security and Defence College, acknowledging the importance of the GAP project in peacekeeping training and education, was represented by its Head, Mr Dirk Dubois, who gave the below introductory speech:

Let me start by thanking our hosts from the GAP-consortium for the excellent conference they have organised. Congratulations for the excellent product you have come up with. It really fills a training requirement GAP, providing essential training on soft skill, much needed in so many of our peace operations. Thank you also for allowing me to address this distinguished audience for a few moments and share with them some thoughts on peacekeepers during this reception in honour of them.

I was born on Flanders Fields – you know, where the poppies grow – or so close by the battlefields as not to matter. Places likes Ieper, Passendaele, Uytschote for me are not just dots on a map, but real towns and villages. So when the centennial of the Great War was commemorated in the past few years, I took a good look at many of the Memorial stones and monuments. Quite often, on British and Commonwealth monuments I found the following text from or rather paraphrasing John 15:13 “Greater love hath no man than this; that a man lay down his life for his brothers.” Now, I usually don’t make a habit of quoting the good book. Even if I still vaguely think about myself as being Christian, I have to admit that I rarely see the inside of a church other than through the eyes of an art-loving tourist. In fact, I don’t want to quote the words of our Lord as much as a religious text, but rather as a philosophical one. I thought that in a room full of military and political science academics, that would be safe, until I realised this afternoon, that we actually have a professor in philosophy attending the conference.

If the good book considers that laying down your life for a friend is a great proof of love, then what does it mean to lay down your life for a complete stranger in a conflict in which by definition you are not a party? Yet this is exactly the sacrifice that has been brought by so many Peacekeepers, whether they were working under the flag of the UN, of the OSCE, the EU, AU,…. Now some of you may think that this is different, because these people were sent by their governments, that they were there as part of their jobs, that their sacrifice was not a personal choice. However, many of them have actually volunteered to be part of a peacekeeping force, many have experienced it as one of the high-lights in their military or civilian careers. And if even one such sacrifice could be avoided in future thanks to a better understanding of the required soft skills in an operation, then this whole project, research and development of the game, will have been worth ever eurocent and every second of time invested.

Speaking from a personal point of view, I have spent most of my life as a soldier. In the course of that almost 40-years long career, I have been awarded quite a few medals and honours. The one I have felt the proudest about when I received it, was the medal I earned serving as a UN blue helmet in the Baranja, now part of Croatia, but at that time still under Serbian control. I still remember that during the medal parade, they were playing E. Vangelis’ “Conquest of Paradise” from the film 1492. The bombastic music is of course conducive to feeling good about yourself, but that was not the real reason for my sense of pride. I honestly believed and still believe today that we have done some good in that region and during the five years that we had a UN contingent deployed there, although with ups and downs, we have made a difference. But I have to admit, I was lucky: at least when I was there, we had a peace to keep and could really contribute to further stabilisation and reconciliation in the region.

Unfortunately, not all peacekeeping missions are so lucky: in many cases, there is little or no desire to have peace by the parties in the conflict, nor is there a will to really impose it by the international community. In these circumstances, although the operations operate under chapter 7 of the UN Charter, this is ill-suited and extremely difficult for the peace-keepers. Some of these missions have been ongoing for more than half a century, the oldest ones UNTSO in the Middle-East and UNMOGIP in Kashmir since respectively 1948 and 1949. Some of these missions have been subject to serious questions about their effectiveness ad usefulness. My Dutch colleagues still cringe when you talk about Srebrenica and UNPROFOR. In my own country, Belgium, every year on the 07 April we commemorate the loss of 10 of our paratroopers in operation UNAMIR during the onslaught of the Rwandese genocide in 1994. We use this occasion by extension to honour all those who have served as peacekeepers in conflict areas around the globe and more specifically all those that made the ultimate sacrifice.

But despite that on a number of occasions things have gone wrong and although, as one of my friends working for the UN recently put it, ” …overall, the pace of the UN is overwhelmingly slow and mostly bureaucratic”, in my opinion in many cases there is actually a will to learn and to improve. In many cases, the UN actually sets standards, for instance by its work on women, peace and security, on combatting conflict related sexual violence, on children in armed conflict, to name but just a few of the important subjects. Similarly, the planned merging of DPKO with the Department for Political and Peacebuilding Affairs in a single Department for Peace Operations could significantly improve the efficiency of the organisation.

To be honest, I don’t think that a structure, an organigram makes so much difference. What makes the difference are the people who work for the organisation. This is why we must continue to invest in sending capable people with the right mind-set to work for the International Organisations. This is why we must continue to train our people correctly and teach them how to react properly in certain situations in an international environment. This is why we need to learn to work with other cultures, respecting each other’s differences without therefore betraying our own values.

Whether it is as a UNMO, as a blue helmet, as a civilian working for the UN headquarters or in the field, as a member of an EU CSDP civilian or military mission or operation, as a member of an OSCE observation team, peacekeepers all over the world, many coming themselves from war-torn communities in recent past put themselves in harms way and even put their lives at stake every day for the benefit of peace. At least from a philosophical point of view, I dare to disagree with the John 15:13 and state: “”Greater love hath no person than this; that they lay down their life so that others can live in peace!“

Thank you for your attention

For more information on the GAP Project, you can visit the respective webpage at https://gap-project.eu/conferences/ 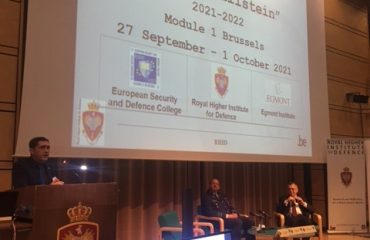 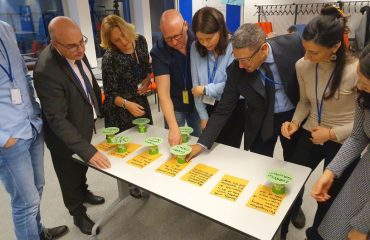 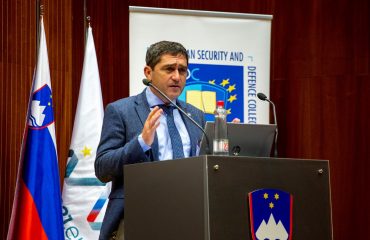